Well, Bob did his best and he did really well but when I got home from school, there was still a lot to do. Even though it was 10:00pm, I pushed up my sleeves, turned on some tunes, got out the cleaning supplies and went to work. I managed to get the kitchen and living room cleaned, organized, and arranged before the exhaustion really caught up with me and I had to go to bed. It was 3:00am.
The next morning I got up and started in with the cleaning once again. I had to work fast because Bob's physical therapist was coming over at 11 and another man from the county was coming over at 1:00. I managed to get our entertainment center set up and all the electronics working by the time the PT showed up.

Bob's PT is super nice and was very surprised at Bob's range of motion and flexibility. He really does have an ability to move and lift the muscles he is left with. It's kind of amazing. There are exercises I have to help him with, but surprisingly, those are few and far between. Bob does most of his exercises in his bed before he gets up in the morning. (He's less tired and more able to get them done first thing in the morning.) He's ingenious in the way he uses his bed for resistance.

After the PT left, another man from the county came by to talk to us about the program Bob qualified for. It's one that gives his an annual budget and with that budget he is able to pay people to come in and care for him. He can pay someone to clean, help him with meals, help him bath, get dressed, exercise, etc. He can also get a membership at the Y, hire a nutritionist, see a chiropractor or massage therapist. He can also get adaptive/assistive aids with this money. All this as long as he doesn't go over his budget. This is great news because there is a lot of stuff we have put on hold or gone without altogether because we couldn't afford it. Now Bob can afford these things and his life will get easier. The budget isn't huge, but it's enough. Also, I can get paid as Bob's personal care attendant. There are lots of checks and balances in place so as to not get in hot water with the budget and Bob can't pay me more than he would pay someone else to care for him. But with the money I get from my work study and the money I get from caring for Bob, we should be OK. Whoot! Another thing Bob is looking forward to is a YMCA membership. He wants to hire a personal trainer to work with him on flexibility since strength training is not an option. As his PCA, I can go and work out with him, so it benefits us both. Unfortunately, this program is slow moving so we won't officially be on it until January so right now we are just getting the paperwork done and jumping through the hoops set before us.

After all our meetings and more cleaning, we still had to go get the cats from the vet. I set out in the van to pick them up. On the way I called in a pizza to be ready for pick up on our way home. I got Maisey and Daisy first and buckled their carriers into the van. Then I got the large carrier that held both Zoe and Chloe. Chloe was crying that sad, mournful wail that cats use when they are at their scardiest. On the way to the van I caught a whiff of cat urine and it knocked me over. I'm not sure if she had peed her carrier prior to me picking her up and I just now smelled it or if she peed on the way out to the van. Either way, it reeked and I had to drive home, stop and pick up a pizza, and drive some more before getting them home. Gah!

Once home, I carried Maisey and Daisy's carriers up to our apartment but didn't let them out. Bob came with me to get the kittens (we still call them the kittens even though they'll be 3 in April). The smell of urine was so strong and gag inducing I had to step back. Once we got them into the apartment, we took the carrier to the bathroom hoping to coral them there while we cleaned them and the carrier up. However, the carrier is so big and our bathroom so small that both cats got out. Each one ran to a separate bedroom and hid. So now we had cat pee in the bathroom and both bedrooms. I carried the carrier to the patio and cried. I'd just spent hours cleaning up sawdust from everything we owned and now I'd have to clean cat pee from the rest of our stuff. Grrrr!

While I was on the patio having a meltdown, Bob was able to coral the kittens into the bathroom. I got myself pulled together and grabbed poor Chloe who looked to be the culprit of the peeing incident. She is normally a very fluffy and vain kitty. At this point her feet, tail, and tummy were all wet and she was acting sad/depressed/humiliated. Poor kitty. We ran a bath and bathed her as well as we could. Never having actually bathed any of our cats before, I wasn't sure how it would go but Chloe surprised us. She lay docilly in the water while we soaped and rinsed, soaped and rinsed her. As I soaped her throat and stomach, I could feel her puring away. Once clean, we lay her in a towel and wrapped her tight. She just lay there enjoying the act of us drying her off. Once dry enough, we let her go and she ran off to groom. We repeated the same with Zoe who, though not thrilled, let us bathe her with minimal effort. She did keep trying to get out of the bath but for the most part was compliant enough and never meowed or cried during the ordeal.

Once both cats were clean, we went to work on cleaning the cat pee from everything. I think we got it. Thankfully, it was all surface cleaning and not deep cleaning so that made things a bit easier. Still, I was overwhelmed and would be so thankful for a day that didn't involve cleaning things. Once everything was clean we were finally able to let Daisy and Maisey out of their carriers and FINALLY eat the pizza I'd picked up. The cats were all a little hesitant and freaked out but we knew they would settle down.

The next day, the cats all seemed in better spirits and more settled in. They were unsure of the new floor and there have been a couple of funny incidents when, while running, they couldn't catch their footing resulting in a cartoon like scene of cat feet moving but the cat not going anywhere. They also don't really like the sound Bob's wheels make on the floor but they will get used to it.
I was looking forward to Sunday since I didn't have anything planned other than church. Bob and I have been visiting a church we really like a lot. It's an urban church that meets in a school on the North side of Minneapolis. It's extremely diverse, quite large, and for some reason we feel at home there. Sunday was no different in our experience there. We really enjoyed the service and look forward to seeing if and how we might be called to serve there. Next Sunday we are going to an event called Pizza With the Pastors to meet the pastors and get our questions answered.

To end today's post, here are some photos of the new floor. Was it all worth it? Now that I'm on the other side of it I can say yes but last week I wasn't so sure. 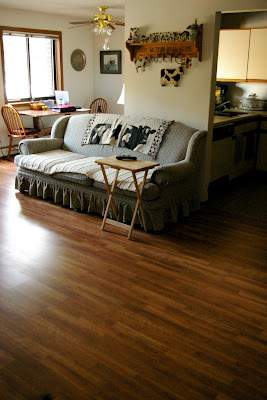 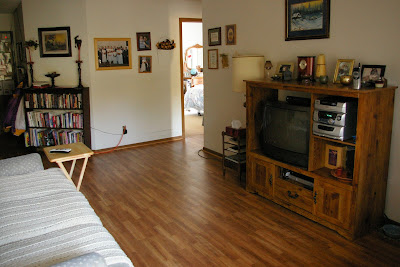 Looking at living room into the bedroom from dining area 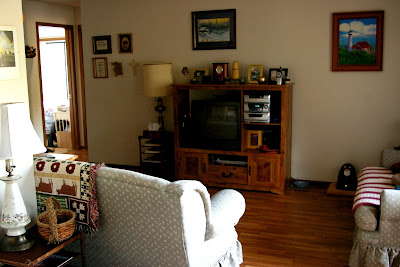 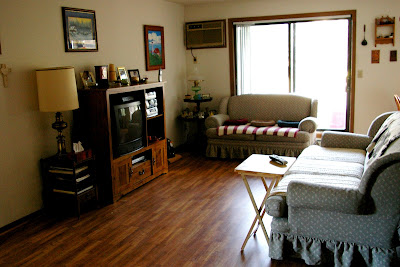 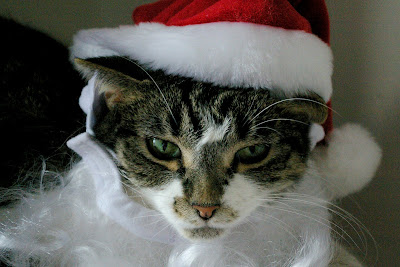 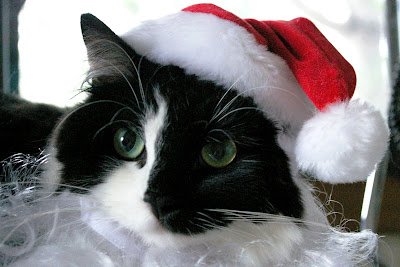 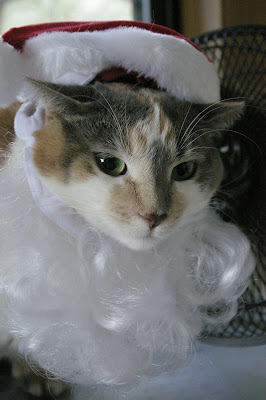 Santa Zoe
Posted by Finding My New Normal at 11:01 AM

Baby Smiling In Back Seat said...

The house looks great, but the three Santas look fantastic!

Finding My New Normal
Twin Cities, Minnesota, United States
Welcome. My name is Amy. I am married to a hunky guy named Bob. We live in Minneapolis with our 3(you read that right) cats and 1 crazy dog. This is my space to rant, write, whine, and work things out in my brain. Your comments are welcome as long as you are not a troll and don't leave assvice. Read on!